Can Artificial Intelligence paint the next Rembrandt?

I am not necessarily an art connoisseur, but a Rembrandt caught my eye. It is a portrait of “a Caucasian male with facial hair, between the ages of 30 and 40, wearing black clothes with a white collar and a hat, facing to the right”; it can be found on nextrembrandt.com. It is exquisite, a typical painting by the great Dutch Master, with his unique interplay of light and shadow and a liberal use of paint on canvas, in what is called the impasto technique. The only problem is that it was not painted by Rembrandt.

It’s created by an AI tool developed by Microsoft Labs, where they analysed his paintings, the demographics of the people he painted, took high resolution 3D scans to understand the impasto, and trained an artificial intelligence device to create “another Rembrandt” four centuries after his death. The rendition was good enough to fool many Rembrandt experts; it certainly fooled me.

So, if an AI tool can create a painting like this, is AI creative? In our minds, creativity is what distinguishes us from most animals, and certainly from AI. It is the last bulwark which remains, as AI tries to take over everything that humans could do and do it better. But if it could paint a Rembrandt, then is this last defence crumbling?

Consider another creative pursuit, music. Google “AI created music” right now: the number of videos top a million. I had the opportunity to listen to a song that I was convinced was a Beatles number, but it was AI software that had created it, lyrics and all. If AI can create such music, then can we consider it creative?

The most powerful technology within AI, deep learning, became famous when a DeepMind creation AlphaGo comprehensively defeated an all-time great in Go (a strategy board game), Lee Sedol, in March 2016. Go is a game of mind, much more complex and not deterministic like chess—it is about controlling territory and requires intuition as much as creativity.

It was remarkable that AI defeated the best human opponent in Go, but what was more remarkable was how it did so. In one game, it played an unusual move, which left everybody thunderstruck. Fan Hui, the reigning European champion, who was watching the game, exclaimed: “It’s not a human move. I have never seen a human play this move. So beautiful. Beautiful. Beautiful.” Beautiful, and creative.

And if this wasn’t enough, IBM unveiled its Project Debater in February 2019, and AI debated the then world debating champion, Harish Natarajan. Both of them had 15 minutes to prepare for this Oxford-style debate. Harish won this time, perhaps because the jury was human, but the AI put up a very creditable performance in this highly creative exercise.

So, with painting, music, mind games and debates being mastered by AI, does that make it creative? To answer that, let us consider what creativity is. One definition is that creativity is the use of imagination or original ideas to create something. Marcus Du Sautoy, well-known author and mathematics professor at Oxford University, paraphrases Margaret Boden, a professor in Cognitive Science, and talks about three kinds of creativity: exploratory, combinational and transformative.

Exploratory creativity is taking what is already there and exploring its outer edges, extending the limits of what is known while remaining bound by the rules—say, Monet painting his water lilies, or Rembrandt creating light and shadows. Mathematics, computers and AI revel in such creativity, and even 97% of human creativity is exploratory.

Combination creativity is taking two different constructs and combining them; rules governing one suggest an interesting framework for another. This is perfect for the world of AI, where algorithms can combine, say, the blues genre with Bach.

The rarest kind of creativity is transformational, or a “phase change” kind, where you create complete game changers out of nothing, a totally new construct which no one had thought of yet. Think Einstein’s theory of relativity, which transformed physics, or Pablo Picasso’s Cubism, which transformed art, or even creating an imaginary number, the square root of -1, which created a completely new understanding of mathematics.

This is difficult because you cannot be taught or trained in it. “The creative adult,” goes a famous quote, “is the child who survived.” This kind of creativity cannot be taught, it can only be untaught. But in machine learning or deep learning, you teach an agent or an algorithm. Thus, this kind of world-changing creativity will always be the domain of human beings, until we learn how to make our machines unlearn. Or two AI tools end up creating an AI child, perhaps, that survives. 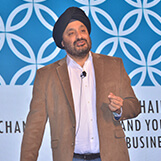 Jaspreet Bindra is the Founder of Tech Whisperer Limited in UK, which does Advisory and Consulting work on Digital Transformation and Digital Technologies like AI, Blockchain, Web3, and the Future of Work.

Jaspreet is a leading expert on Digital Transformation, Blockchain, Future of Work, and AI. He was the Group Chief Digital Officer at Mahindra Group, a $20bn conglomerate, and a Regional Director at Microsoft before that. He is the author of the bestselling book ‘The Tech Whisperer: On Digital Transformation and the Technologies that Enable It’, published by Penguin Random House, as well as ‘The Immune Organisation: Future Proofing Organisations from COVID-like Disruptions’, published by Amazon Westland.

He was recognised as the inaugural ‘Digitalist of the Year’ by Mint and SAP in 2017, is an Educator at Duke, Moderator/Educator for Harvard Business Press, Expert at Singularity University, Visiting Faculty (Q4 2022 onwards) at Ashoka University, and was a Scholar-in-Residence at the Indian School of Business.

He divides his time between Cambridge, UK and Gurgaon, India. He started his career with the Tata Group, as a part of the Tata Administrative Services, and is a Chemical Engineer and an MBA in International Business