This election season, India saw a huge turnout of voters. So if voting is made compulsory, would it ensure a better participation? Or is it better voter education that we need? Our Outstanding Speaker and Former Chief Election Commissioner of India, Dr S.Y Quraishi discusses the aspects to make voting a more participative event. Here’s an excerpt The proposal for compulsory voting has been raised for years in response to chronic voter apathy, especially in urban areas. However, persuasion by education, rather than compulsion, is the answer. In fact, compulsion and democracy are the antithesis of each other. You can read the full article here – http://www.hindustantimes.com/analysis/voter-participation-can-be-achieved-through-systematic-poll-education/article1-1287635.aspx 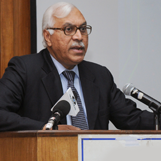 Given his more than 35 years in the civil services in various roles, Dr. Quraishi best understands the intricacies of governance and policies of India and shares his insights on how the world’s largest democracy works. He has delivered lectures at several universities, including Harvard, Yale, Pennsylvania, California, North Carolina, UC Berkeley, Cambridge, and London.

He is well regarded for his special contributions in social sector reforms covering health, education, population, drug abuse, civil society action, women and child development, HIV/AIDS, youth and adolescent issues. He is known to be the first person in the world to get a doctorate in social marketing, a concept he has effectively used for creating public awareness and behavior change.

He set up the India International Institute of Democracy and Election Management which, in a short span of two years, has already trained election managers of 35 countries.