Our speakers Naina Lal Kidwai and Sumit Makhija give their views on the importance of governance from an organisation’s viewpoint and an advisory viewpoint respectively.

I would like to believe that people generally seek organisations with high values and indeed this helps in recruiting and retaining staff as employees are proud to belong to organisations with high governance standards. An organisation with poor standards is likely to have to watch its employees closely as individuals then work for private gain, possibly creaming off money to line their private pockets as they learn bad practices from their bosses. The right governance standard is a win-win for the organisation.

How can an organization covert the governance framework into an effectively implemented principle followed by employees?
While I believe people generally want to do the right thing, we live in an environment, unfortunately, where there is a blurring of the right and wrong and bad practice is not frowned upon and, in fact, tolerated too easily. Training programs will have to go beyond opening statements of commitments to values the organisation embraces. We need to run training modules encouraging our employees to think this through, go through role-plays on how to act. A sales training course would need to focus on values and what is construed as mis-selling and not just how to close a deal. The values of the organisation should be captured in short catchy phrases which are evident everywhere—when you open up your computer, on posters, mugs and giveaways, awards, blogs and more.

Studies show that better engagement scores of employees are achieved in those organisations where the DNA of the organisation is right. This alignment needs to be worked on as it doesn’t happen just because we believe in it. Employee volunteering programs where employees volunteer their time for the companies’ CSR programs can also align the corporate’s and its employees’ aspirations of giving back to society. Studies have shown that such programs also enhance employee engagement with the organisation.

Nor can we stop at our organisation alone. We need to work with our suppliers and encourage them to embrace our values. Take the case of water where there are many examples of business disruption due to water challenges. Short-term efforts to tackle water woes will not be very beneficial unless water is reliably delivered and sustainably managed. Water stewardship starts with companies responding to their own water-related risks through improvements in policies and processes, collaboration with external stakeholders including its supply chain and working collectively to enhance efficient water management including at the catchment level.

Values cannot be negotiable and companies that follow these principles are rewarded in the long run by all stakeholders—employees, shareholders, and the communities they serve.

How big is the problem of corporate fraud in India? And how does it compare with the rest of the world?
Corporate fraud is a significant problem in India, which is evident from a spate of large scale frauds affecting several companies in the recent years. Fraud may occur at all levels and in numerous ways, such as financial misstatement, bribery and corruption, asset misappropriation, data theft/leakage, identify theft, to name a few. This is despite the efforts of organizations to step up their fraud management mechanisms and of the government in tightening regulations to curb the issue of fraud and corruption.

The Deloitte India Fraud Survey Edition II corroborates this, indicating that 80% of large companies experienced fraud, misconduct or malpractice in the last two years, impacting them significantly. From a futuristic standpoint, 70% of respondents from large companies believe that corporate fraud is set to rise more over the next two years. The main reasons identified were diminishing ethical values and ineffective controls. Preparedness to emerging fraud and noncompliance risks such as social media and anti-competitive behaviour appears to be low among corporates. The survey also found that opportunities for fraud also arise when the tone at the top is lax or due diligence is inadequate.

The situation is similar across the globe, with fraud and corruption being seen as serious cause for concern by corporates and governments worldwide. According to the Report to the Nations on Occupational Fraud and Abuse 2016, a study conducted by the Association of Certified Fraud Examiners (ACFE), the typical organization loses 5% of its revenues in a given year as a result of fraud, which is tantamount to the total loss exceeding USD 6.3 billion.

Does the country have the right policy environment for corporate governance?
The government has been taking steps in the right direction to support corporates in their fight against fraud by introducing specific section in the Companies Act 2013, which casts significant responsibility on senior management for fraud risk management and also has provisions for penalties on companies and their officials that are found to be noncompliant. Taking a cue from anti-corruption laws and enforcement actions across the globe, the Indian government also proposed the Prevention of Corruption (Amendment) Bill, 2013, which widens the scope of the existing law as well as its reach and is pending for approval with the government.
One of the major initiatives taken by the government has been demonetization, which, among other objectives, aims to curb corruption as one of the key agendas. However, the most important issue facing such inititiaves is the effective implementation of laws and regulations to curb fraud and corruption and create a strong corporate governance environment, as demonetization by itself will not prohibit people and companies from undertaking corrupt activities.

Entities in the private sector cannot ignore their critical role in creating a sustainable anti-corruption culture within and outside their organizations, which can be implemented with effective corporate governance, creating an ethical culture, collaborating with government and civil society in knowledge sharing forums, and setting up a zero tolerance policy for corruption. This needs to be supplementary to the role of the public sector in fighting corruption, as the government may build up a framework to tackle fraud and corruption but making it effective requires active participation from everyone.

The fight against fraud/corruption is not the government’s fight alone; it is a fight for all stakeholders – government, business, and citizens. A policy framework which is not supported and enforced (both public and private) is bound to be ineffective, as would failure to recognize and report any noncompliance. Collaboration between the private and public sectors, with both assuming responsibility and taking ownership towards effective implementation, are paramount to root out the menace of fraud and corruption. 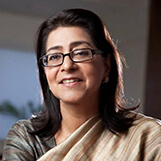 Naina Lal Kidwai is Additional Director and senior Advisor Rothschild India, senior Advisor Advent International and; a non executive director on the boards of Holcim, Max Financial Services, CIPLA, Nayara Energy, Gland Pharma and UPL; and Past President of the Federation of Indian Chambers of Commerce and Industry(FICCI). She retired on December 2015 as Executive Director on the board of HSBC Asia Pacific and Chairman HSBC India, and in April 2018 as Non Executive director on the global board of Nestle.

An MBA from Harvard Business School, she makes regular appearance on listings by Fortune and others of international women in business. A recipient of many awards and honours, she was awarded the Padma Shri by the Government of India for her contribution to Trade and Industry. She has published several articles in mainline dailies and has authored 3 books, “Survive Or Sink - An Action Agenda for Sanitation, Water, Pollution and Green Finance”, “Contemporary Banking in India” and “30 Women in Power: Their Voices, Their Stories.”

Her interests in Water, Sanitation and the environment and empowerment of women are reflected in her engagements at Shakti Sustainable Energy Foundation, International Advisory Council of the Inquiry of United Nations Environment Program (UNEP), Commissioner for the Global Commission on Economy & Climate, Advisory Board Wildlife Conservation Trust, The Rockfeller Foundation Economic Council for Planetary Health, Chair of FICCI’s Water Mission and founder and Chair of the India Sanitation Coalition.