It is said that experience is the mother of all teachers, and after having experienced a journey of several years in the media, Our Outstanding Speaker, Founder & Former MD of Network 18, Entrepreneur and Business Leader, Raghav Bahl shares his learnings and his thoughts about his next big venture in an interview. Here’s an excerpt In today’s time, if you look around you will realise that the future of news is in the digital space. When we say digital, we mean, of course, traditional web sites but also increasingly, the hand held devices, which is truly a multi-media device—it contains a whole world inside it. This device is the single port of call for news, information and entertainment. You can read the full article here – http://archive.financialexpress.com/news/-my-dream-to-own-a-newspaper-is-dead-/1294286/1 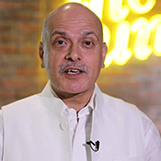 In his first innings (1992-2014), Raghav founded the Network18 group of media companies. Starting from scratch, Raghav built Network18 into a formidable network of over 12 news channels (including CNBC-TV18, CNN-News18, CNBC-Awaaz, and News18 India), over 10 entertainment/infotainment channels (including the Colors Network and History-TV18), and leading internet portals (including moneycontrol.com, bookmyshow.com, firstpost.com, among others). As Network18 grew into a billion-dollar-plus media enterprise, Raghav built successful partnerships with some of the world’s leading   corporations, including CNBC, Viacom, Time Warner, A&E Networks, BBC, Star TV, and Forbes.

In his second innings, which began after his successful exit from Network18 in 2014, Raghav has co-founded the Quintillion Media Group, which is a future-ready, digital-first news/information pioneer, including such new-age brands as The Quint and BloombergQuint. Raghav is also an investor in other fast-growing digital media operations, including The News Minute, Quintype Technologies, and Youth Ki Awaaz.

Along with being a media entrepreneur, Raghav is also one of the most accomplished news editors in the country. He is a senior member of the Editors Guild of India. His columns and digital videos are remarkably popular on his websites and social media platforms like YouTube, Instagram, Twitter, and LinkedIn.

Raghav is also the author of three books which triangulate the Geoeconomics among India, China, and America: SuperPower - The Amazing Race Between China’s Hare and India’s Tortoise (2010); SuperEconomies - America, India, China and the Future of the World (2015); and Super Century - What India Needs to do to Rise by 2050 (2019).

Raghav graduated in Economics (Hons) from St Stephen’s College (1979-82). He completed his Master’s in Business Administration from Faculty of Management Studies, University of Delhi (1982-84). He briefly worked with AF Ferguson & Co and American Express Bank after finishing business school.