Video Blog: What makes an organisation and its people future-ready?

What makes an organisation and its people future-ready?

Future-ready is being able to consistently mould yourself to a new environment. To do that, Prakash Iyer – Former MD, Kimberly-Clark Lever, Author, Speaker, Coach – shares a two-pronged approach.

“If you want your employees to innovate, you’ve got to make it easy for them to fail” 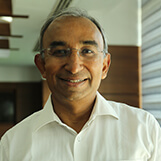