“We All Are Strong and Beautiful”

From an Army widow to Army officer to pageant winner, Captain Shalini Singh has reinvented herself many times in life, charting her own path, on her own terms. On International Women’s Day, we spoke to her about her life journey that epitomises both beauty and bravery.

Army wife, Army veteran, pageant winner and single mother – you have played diverse roles in life. What encourages you to keep reinventing yourself?

You stand for both bravery and beauty, two facets that are often held opposite to one another. How do you straddle both expectations?

What is the biggest gender bias you have faced, and what did it teach you?

As a single parent, what’s your biggest challenge and strength? Any advice for single mothers?

To all the other single mothers, I know it’s tough but as I say, “the best view comes after the hardest climb…” You are polishing a diamond and that’s not easy! Enjoy it.

What are the two things you balance in life each day, either mentally, physically, or emotionally?

I keep myself physically and mentally fit and active. Because if I lose my health, then it’s all gone. I have to take care of my health and I can’t expect others to do it. So, I try and balance a healthy lifestyle amid all the stress and pressure. 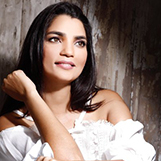 A true definition of woman of substance, Capt. Shalini Singh is a story of grit and strength. Married in her teens and widowed at the tender age of 23, Shalini has battled many odds and constantly reinvented herself to emerge as a role model for women everywhere. Her sessions are an inspiring reminder of how adversities can be opportunities in disguise.

After losing her husband Maj Avinash Singh Bhadauria, Kirti Chakra (Posthumous) to war wounds, Shalini decided to join the army. Despite her lack of experience or prior exposure to such a physically gruelling environment, she made it through and is today a proud veteran of the Indian Army. After six years of service, Shalini retired to spend more time with her son. But her journey continued in new roles – first as a mother, then a corporate executive and further.

In 2017, she was crowned Mrs. India Queen of Substance. She is also the first Indian to represent the country in a beauty pageant (Ms Earth in USA) in the single parent category. And the recipient of many coveted awards, including the Veer Nari Samman by Govt of India, EPIC Award 2018, citations of honours by Lions Clubs and All India Achievers award.

After a near-fatal accident which left her bed ridden for almost a year, Shalini bounced back and began running, despite her doctors advising otherwise. Many such stories of survival and determination shine through in Shalini’s talks. Today, she is working in various capacities to help people with physical and emotional wounds – from slum children and war widows to cancer support, animal welfare and people with disabilities.

Other than being a soft skills and pageant trainer, she is a regular and sought-after speaker at various platforms in schools and companies like GD Goenka, Yum Foods, Army Wives Welfare Association (AWWA), Lions Club, Revlon India, Mukta Foundation Chennai and many more.

She was the face of the Indian Army in the campaign, “Do you have it in you”. And has also been associated with various other campaigns, such as Mrs Rajasthan, Mom and Me, Skin Essentials, JK Cement Ltd, Mother’s Day campaign for Pizza hut, Super Sikh Run and Soldierathon.