Why You Must Stop Focusing on Customer Problems

A few days ago, in the quest for entertainment, my son and I were playing chess. For the first game, I used simple tactics, and I won. As we started with the second round, I tried to make it difficult for him to win. He improved his game, too, but eventually lost the second round. The third time, I amped my tactics further while he further enhanced. Yet, I won the third game. And before we could begin the fourth, he said, “Let’s play something else.” He changed the game and brought Snakes-n-Ladders, a game that leveled the playing field for both of us as we continued.

You will often hear when someone is talking about disruptive innovation, “Uber didn’t kill the taxi business; limited access and fare control did!” And when you hear this, the typical response comes in one of the two ways – the first says, take the help of incremental innovation and try to fix those problems. In contrast, the other response is to adapt to the disruptive innovation playbook. But, I argue, both are not sustainable, not enough!

The challenge with exponential growth

Once Dr. Albert Bartlett made a profound statement, “The greatest shortcoming of humanity is our inability to understand the exponential function.” The logic is simple and irrefutable. Exponential growth cannot proceed indefinitely within a finite system, be it on earth or in an economy.

To explain, Bartlett gives an interesting example. Suppose we put one hypothetical strain of bacteria in an empty bottle at 1100 hrs. Bacteria grow by dividing themselves, thus doubling at a finite rate. Let’s assume every minute they double. Then we observe that the bottle is full at 1200 hrs. With this information, he asks two questions.

The first question here is: what time the bottle was half full? If you think carefully, the answer is, 1159 hrs, just a minute before 1200 hrs. And, that is because they double every minute. Now the second questions are: if you were one of the bacteria in that bottle, at what time would you realize that you are running out of space? Let’s first see how the bacteria population was for the last few minutes in that bottle. At 1159 hrs, the bottle would be 50% full, at 1158 hrs it would be at 25%, and thus, it would be only 3% full at 1155 hrs. For most people, this may not be a cause for alarm. If that is the case, how many of you would realize there is a problem, just five minutes before it’s full? When is the best time to take some action?

There is no correct answer to it. To the question, “When should you take action?” The only appropriate response is – today and now! This example not only explains how exponential growth works but also tells us the gravity of the situation concerning disruptive innovation, which often results in exponential growth in the market.

But it would be a big mistake if someone thinks that taking quick action is the best defense against disruptive innovators. Let me explain this by extending Bartlett’s example and reveal the real problem.

Suppose a few smart bacteria in that experimental bottle decide to take quick action, just 2 minutes before 1200 hrs, when it goes 100% full. Since they realize that they are running out of space, they start searching for new bottles. Assuming they are very fortunate in their endeavor, they find three new bottles. Now they have four bottles in total. Do you think they have everything under control now?

Now, here is the third pertinent question: With the discovery of three more bottles, how long can they continue? We already know that by 1200 hrs, the first bottle will be 100% full, with three more to go. At 1201 hrs, the second bottle would be full, still two to go. And at 1202 hrs? All four bottles would be full, and that would be the end of it!

Even if you act just a few minutes before, you will only be able to buy a few more minutes before things go out of hand; and this is the main problem!

Shifting the focus to change approach

Let’s take the example of a transportation business. If about ten years ago, you were to improve transportation and fix industry problems, such as access and fare control, what would have been your approach?

If you were a believer in incremental innovation and had “fix the problem” culture, you would have thought about improving access. You would have worked toward regulating fare and making it more affordable. Mostly, your focus would have been, “How do I fix the current problem?”

However, if you were a believer in disruptive innovation, you would have thought, “How do I bring a change?” And perhaps Uber (or something similar) would have been your answer.

But, if your focus is on the purpose of your company and the value you wish to provide to your customers, your outlook will be very different. You will ask, “What is my customer trying to achieve?” This approach will make you think in terms of transforming the transportation business to match it, and so you will improve the overall value proposition.

When you start to think about tomorrow and overmorrow, i.e., the day after tomorrow, your strategy changes radically. For legacy businesses, digital or business transformation is already overdue. However, all the others need to progress beyond that and must start thinking about problem transformation.

Are you still trying to make a better hammer or have changed to a drill machine? Perhaps you now think about how to help customers make a hole in the wall. But, think again – aren’t you primarily trying to help the customer to display a beautiful picture on the wall? And depending upon how you see your value proposition, your focus will change. After all, why would someone make a hole when they can use removable stickers?

People who used taxis before shifted to Uber and similar services for their Urban commute, which significantly covered office going population, circa 65%. However, the moment this working population starts to work remotely, they won’t use transportation services much. They would instead use Zoom, Skype, or MS-Teams. That would eliminate the need for transportation or make it minimal. This change shifts the competitive landscape significantly as you will find Uber competing for the customer’s wallet share with Zoom et al.

When my son and I were playing, we intended to entertain ourselves. When he realized that he was being outsmarted and won’t be able to win at all – he changed the game and leveled the playing field by focusing on the intent.

You can transform and change the game too, but only if you think two steps ahead of disruptors. And, to do that, you must shift your focus from customer problems to customer intents – respond to those intents in the best way you can and enjoy staying ahead of the curve! 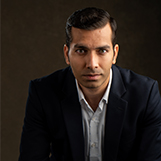 Anand is a global speaker, passionate about sharing his experience and loves to inspire. He specializes in contemporary topics that are at the intersection of technology and people. You will find his talks candid, deeply meaningful, and full of common sense with humour.

As a professional coach and mentor, Anand often works with entrepreneurs for bringing their ideas to life and converting strategies into reality. He also coaches high calibre professionals for building their thought leadership brand.

He is an entrepreneur and innovation expert who is obsessed with bringing ideas to life and make them work for everyone. For the past 20 years, hundreds of businesses and thousands of individuals have been able to see the impact of Anand's work.

Being a polymath, Anand can often shed new light on a topic, which you feel has been "done to death." The fact that Anand has a degree in engineering & business, and having worked in a wide range of industries, countries, and cultures gives him a deeper understanding of the impacts of technology. He can see things with uniquely different lenses and knows how to work through them.

Anand is an award-winning author with a few books under his belt. In 2019, IoT Hub Australia nominated him for the "IoT Pioneer" award. In Dec-2019, Consensus Group Australia honoured him with the "Best Author of the Year" award.

Anand is a transformation specialist and is a well-known innovation expert. He works with organizations that want to transform into a sustainable brand with creative and innovative employees. Anand helps people in leveraging emerging technologies, adapt, and develop an innovative mindset.

In the past, Anand extensively worked with several Fortune 500 multinationals such as HSBC, LG Electronics, Commonwealth Bank of Australia, and likes of them. He has thorough experience in Manufacturing, Education, Pharmaceutical, Telecommunications, IT, Banking, Insurance, and other few industries.

This National Doctor’s Day on 1st July 2022, Boston Scientific India is #AdvancingforYou with a conversation to lea… https://t.co/UfPQHUYap7