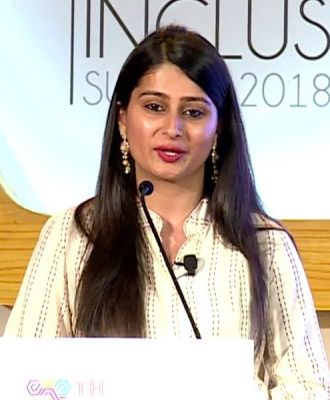 RT @DeepaAthlete: Om shanti. Feel blessed to have met him, and heard his inspiring words and receive his blessings in person. We will alway…

An international para-athlete, counsellor and co-founder of the Wheeling Happiness Foundation, Devika Malik is a resounding global voice in the sphere of inclusivity for people with physical, emotional and social challenges.

Born with hemiplegia, a condition that causes paralysis to one side of the body, Devika developed a sensitised world view from early on. She not only overcame her disability to become an international para-athlete but has also become an inspirational role model through her work with people facing different types of challenges – educating economically under-privileged children, vocational training for rehabilitated sex-workers & AIDS-affected children, and emotional and physical rehabilitative techniques for physically challenged individuals.

Today, she is a leading voice for young people with disabilities at the Commonwealth and the United Nations and has represented India at many international forums, including the Commonwealth Youth Forum and Bright Ideas Talk at Commonwealth Secretariat.

Devika holds the unique honour of being one of only two youngsters, chosen from across the commonwealth, to speak at the opening ceremony of the Commonwealth Heads of Government Meeting 2018 (CHOGM) in London in front of Heads of State of 53 nations, including the Indian Prime Minister, Mr Narendra Modi and the entire Royal Family. She also addressed high level stakeholders at the first-ever global Disability Summit in London in 2018.

In 2015, she was awarded the Queen’s Young Leader Award for her work with underprivileged people with disabilities and towards disability awareness and universal inclusion in India. In her career as a para-athlete, Devika has won three medals at the IPC Athletics Grand prix, and multiple golds at the National Para-Athletics Championships between 2010 and 2015.