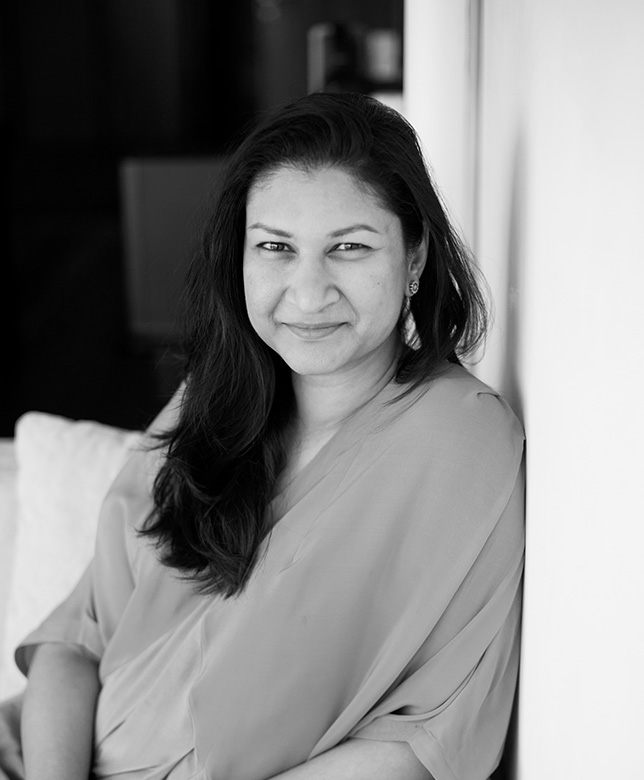 From switching careers to hopping countries and building one of India’s favourite F&B brands, leading restauranter Gauri Devidyal has created her own space in a typically male-dominated industry.

A law graduate from University College London and a Fellow of the Institute of Chartered Accountants England & Wales, Gauri pursued a career as a tax consultant with PricewaterhouseCoopers in London for 8 years before returning to Mumbai where she was born and brought up.

In early 2008, she met her husband, Jay Yousuf and was persuaded to leave the tax profession and to join him on his restaurant adventure. With no previous experience of the hospitality industry and having never dreamt of doing anything entrepreneurial, Gauri nevertheless supported Jay in creating The Table, a restaurant in South Mumbai, which has gone on to win many accolades and much recognition in the city as well as internationally, including being rated the #4 restaurant in the country by a leading travel publication.

While planning the restaurant’s popular wine list, Gauri was encouraged to take on the Wine and Spirits Education Trust’s Level III exam which she completed with a flying distinction. She was on the jury panel of the India Wine Awards for the last two years and has been at the forefront of the farm to table initiative for the restaurant by setting up The Table Farm in Alibag, from where the restaurant gets much of its fresh produce.

In 2016, Gauri co-founded Magazine St. Kitchen, a culinary playground for intimate dinners, cooking workshops and more, housed in a restored heritage structure, in Byculla - a space that has already created an unparalleled buzz within the food community. The Kitchen is also the base for the wholesale and the retail bakery – Mag St. Bread Co and the group’s cloud kitchen.

In 2018, Gauri partnered with the team from Neighborhood Hospitality (Woodside Inn, The Pantry & Bombay Vintage) to open Miss T, a South East Asian fine dining restaurant and cocktail lounge in Colaba, which has now transformed into a delivery kitchen.

Having previously co-hosted a podcast; ‘The Colaba Cartel,’ Gauri identified her passion for the platform early on and currently hosts not one but two podcasts, by herself. ‘This Round Is on Me,’ wherein she has hosted prolific speakers such as Barkha Dutt, Divia Thani, Harsh Mariwala and more. And her recent endeavor to highlight women in business, that sets the stage for her third podcast, ‘Women On Top In India.’

Gauri and Jay launched a delivery kitchen in Byculla, called Iktara. Delivering comfort Indian food all throughout Mumbai. During the pandemic, Gauri and Jay launched Mag St Toppings. Serving up the ultimate comfort food- pizza! While offering a Chef’s selection and over 35+ toppings for the residents of Mumbai and Alibag to choose from.

Most recently the two revamped their second brick and mortar space which was formerly Miss T, to transform it into an all-day dining experience cafe that focuses on comfort, conscious practices and the community; also known as Mag St Cafe.

Gauri, now 41, lives with her husband, Jay and 9 year old daughter, Dia. As one of the very few women restaurateurs in India, she is a full time hands-on businesswoman and mother and handles both roles with equal enthusiasm.

She was listed in Forbes India’s 120 Leaders of Change, GQ’s list of the 50 Most Influential Young Indians, BlackBook’s Top 50 Women in Indian Luxury. She is a Tedx Speaker and Jt. Secretary on the Managing Committee of the National Restaurant Association of India.

Gauri recently started writing a recurring column for the national newspaper, whilst alsowriting for other print and online publications on her favourite subject - food and travel. She is also on the Advisory Board for the India arm of US founded GLEAM Network, a mentoring program for F&B professionals.

From switching careers to hopping countries and building one of India’s favourite F&B brands, Gauri Devidyal has created her own space in a typically male-dominated industry. A leading restauranter and co-founder of the hugely popular SoBo restaurant, The table, Gauri spoke to us about what it takes to achieve success in the highly competitive world of hospitality, especially without any prior experience in the space. And how her own brand has evolved in the process.

Gauri hosts the podcast, ‘This Round Is On Me’, which features thought leaders and visionaries in different industries sharing their lessons from past experiences and thoughts on future trends. Reach out to us to engage with Gauri on what it takes to redefine and realign organizational goals to chart a new road to success.