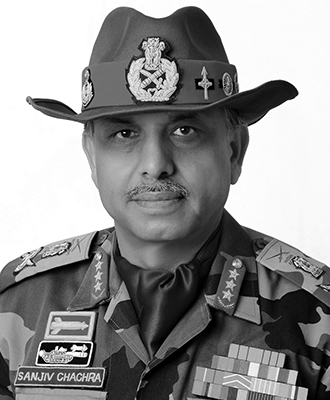 Lt Gen Sanjiv Chachra has not only battled challenges threatening the nation during his long service in the Army, but through his decisive and inspiring leadership, has built motivated mission-oriented teams to discover their true potential in pursuit of excellence, leading them to success and decisive victory.

He is perhaps the only Indian Army General to have commanded two of the largest frontline field armies of the world, namely, the Western Army protecting the Indo-Pak border and, later, the Northern Army wherein he brought peace to the turbulent Jammu & Kashmir as well as secured our borders with both China and Pakistan.

Fueled by an enigmatic military career and battle-hardened experiences, he shares his immeasurable wisdom on all encompassing courage, confronting adversity, handling conflict, leadership in its multi-dimensions, and motivation, through his engaging sessions, peppered with real life examples.

As the Military Secretary (HR Head) of the Indian Army, he was responsible for planning careers and organisational employment of its 45,000 cadre-strength officers. He has also aided the government in launching major initiatives in infrastructure development, town planning, acquisition of weapons and equipment and welfare projects.

Gen Chachra has the unique experience of sharing his military expertise with friendly foreign armies of the world, and represented the country to Russia, South American, African and Middle East countries, USA and Pakistan among many others, for military cooperation, acquisitions in weapons, equipment, training support and confidence building measures. He has also assisted the African nation of Namibia in her transition to independence as a military observer of the United Nations.

Currently, as a Member-Judge, in the Armed Forces Tribunal (the Appellate Court for Servicemen), Gen Chachra has brought to bear his intellectual depth and wisdom coupled with a humane approach in adjudicating cases in deference to law.

For his dedicated service to the nation and outstanding leadership, the President of India has conferred Gen Chachra with the highest service award of PVSM.

He also aided the government in launching major initiatives in infrastructure development, town planning, and welfare schemes for soldiers and ex-servicemen. Besides, he has represented the Indian Army and the government in various foreign delegations for training support and confidence building measures.