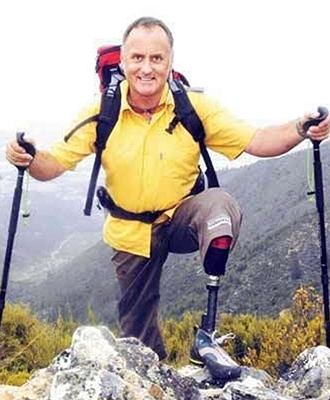 On the road to Mumbai - what on opportunity to share with the best @ETNOWlive @TimesNow #IndiaEconomicConclave https://t.co/jQMbpFqCwa

A grest place to talk about change - a constant in Mumbai @ Mumbai, Maharashtra https://t.co/SFpqXNYxFA

Mark Inglis is a mountain climber with an enigmatic willpower. Also, a researcher and a winemaker, he is the first double amputee to climb Mount Everest. Mark decided to share his experiences and motivate others through his speaking sessions, post his retirement from mountaineering. Due to his unique and interesting approach of drawing parallels between the ferocities of the mountains and the business markets, Mark is one of the most sought-after speakers.

With an innate passion and love for mountains, Mark started his career as a search and rescue mountaineer with the Mount Cook National Park in New Zealand. On an expedition in 1982, due to a blizzard, he got stuck in a snow cave for 13 days along with his climbing partner. Owing to the awfully low temperatures inside the caves, both men suffered from frost-bitten toes and legs. Upon being rescued, Mark’s legs had to be amputated below the knee.

Although undergoing a grim phase in his life, Mark decided to never give up on his dreams. About twenty years later, he scaled the peak of Mount Cook and four years after that he conquered the giant – Mt. Everest.