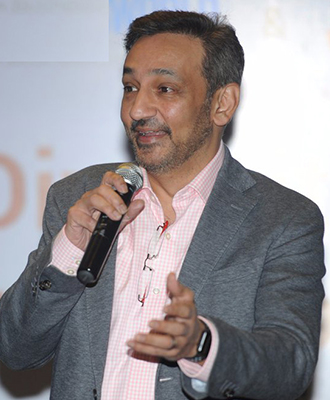 With about three decades of experience in the food service industry, Niren Chaudhary drives businesses to achieve breakthrough successes. A strong advocate of hands-on leadership, he enjoys sharing his stories from the years.
Niren believes that the culture of an organisation is the key to its success, and hence, devotes a lot of his time in training company managements and franchises. Niren currently serves as the Chief Operating Officer and President of Krispy Kreme's international division. Before this, he was known as the leader who made KFC the fastest-growing quick-service brand, as the President of the company’s global operations.

He was also involved with the growth stories of various food brands in the country, as the President of Yum! Restaurants (India). He has played a key role in building Pizza Hut and helping Taco Bell enter India in 2010.
He is the recipient of NCPEDP Shell Helen Keller Award and Fanchise India convention’s ‘Face of the Year’ award 2011. He also received the award for companies that believe in gainful employment for persons with disabilities from the President of India.