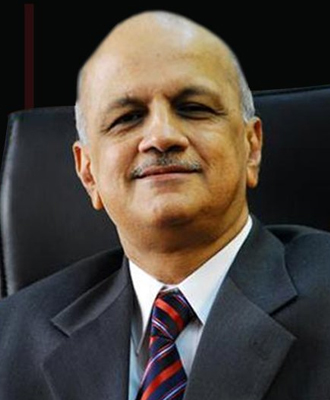 While #Budget2018 is directionally correct in their approach to #digital adoption, adequacy of allocations for… https://t.co/7x9KkNooeg

Emphasis on wider use of #blockchain technology and delinking it from specific cryptocurrencies shows wisdom and di… https://t.co/OYjREfRGfl

Encouragement of indigenous development of 5G technologies in institutions like IIT-M is welcome and needs to be co… https://t.co/c2LquB5Tie

Emphasis on achieving universal #health coverage requires greater focus on #technology, as the mission can only be… https://t.co/ohBZ9NxBoc

As former Secretary to the Government of India for Electronics and IT, Chairman of the Telecom Commission of India and Secretary Telecom and former President of NASSCOM, R Chandrashekhar possesses a unique breadth of expertise and experience, both in the government and private sector, that cover the entire gamut of the IT and telecom sectors. He is a strong advocate of forward-looking policies that power the country’s transition to a digital economy and a global IT powerhouse.

As President of NASSCOM, he was the widely recognised face of the IT-BPM industry globally. He took head on the challenge of global market development for the industry while advocating forward-looking and fair policies in other countries in the face of a wave of anti-globalisation and protectionism sweeping the world.

At home, he has been a respected advocate of progressive and open policies that are good for the industry and the country and enable faster adoption of technology, development of the domestic market and acceleration of innovation. Specific industry initiatives for driving the growth of the start-up eco-system in the country and building agile, scalable skilling programs for New Age skills bear special mention in this context.

He was in the Indian Administrative Service till 2013, and played a pivotal role in many momentous and path-breaking IT and telecom related initiatives at the national and state level. As Chairman of the Telecom Commission and Secretary DOT, he was responsible for driving several key policies and strategies covering licensing, spectrum management, National Broadband Plan, Convergence, Manufacturing, Investment, security, and R&D. He was the principal architect behind the National Telecom Policy 2012. He was also principally responsible for developing the National ID project (now called Aadhaar).

R Chandrashekhar has a deep understanding of cultural diversity and management issues in a multi-cultural and international milieu. USA, UK, EU, Japan, China, Australia, Malaysia and Singapore are some of the countries which he has extensively engaged with, both at Government and industry levels. He has been a member/ leader of innumerable delegations to other countries and has wide experience in bilateral and multi-lateral negotiations, business negotiations as well as industry-government dialogue and policy advocacy across multiple geographies.