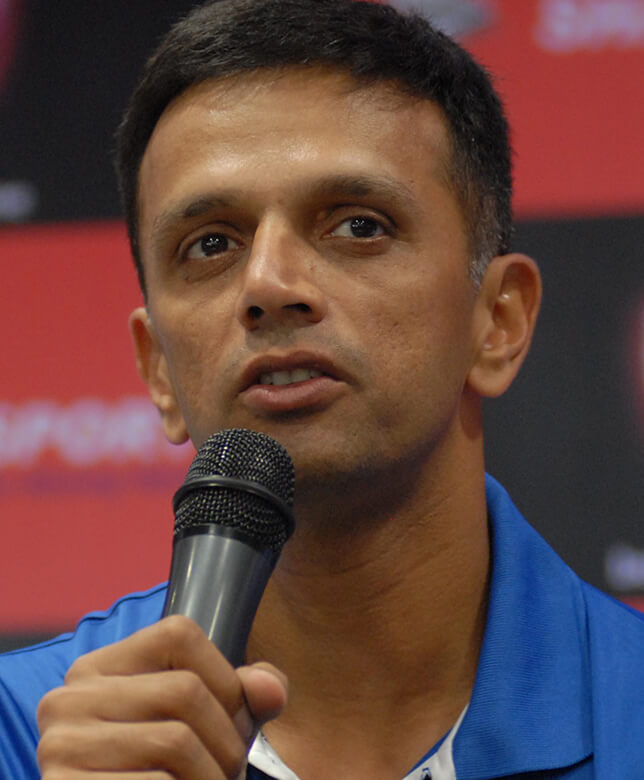 Rahul Dravid needs no introduction. One of the greatest batsmen in the history of cricket, he is the current Overseas Batting Consultant for the Indian team, and head coach for the Under-19 and 'A' teams. His sessions are interlaced with anecdotes and locker room stories that talk about his struggle, his resilience and his focus to beat all obstacles.

Hailed as The Wall, Dravid was named one of the best five cricketers of the year by Wisden Cricketers' Almanack in 2000 and received the Player of the Year and the Test Player of the Year awards at the inaugural ICC awards ceremony in 2004. In December 2011, he became the first non-Australian cricketer to deliver the Bradman Oration in Canberra.

In 2014, Dravid joined the GoSports Foundation, Bangalore as a member of their board of advisors. In collaboration with GoSports Foundation, he is mentoring India's future Olympians and Paralympians as part of the Rahul Dravid Athlete Mentorship Programme. Indian badminton player Prannoy Kumar, Para-swimmer Sharath Gayakwad and young Golfer Chikkarangappa S. were part of the initial group of athletes to be mentored by Rahul Dravid.

As of December 2016, Dravid is the fourth-highest run scorer in Test cricket, after Sachin Tendulkar, Ricky Ponting and Jacques Kallis. As of October 2012, he holds the record for the most number of catches taken by a player (non-wicket-keeper) in Test cricket, with 210. Dravid holds a unique record of never getting out for a Golden duck in the 286 Test innings which he has played. He has faced 31258 balls, which is highest number of balls face by any player in test cricket. He has also spent 44152 minutes at the crease, which is highest time spent on crease by any player in test cricket.