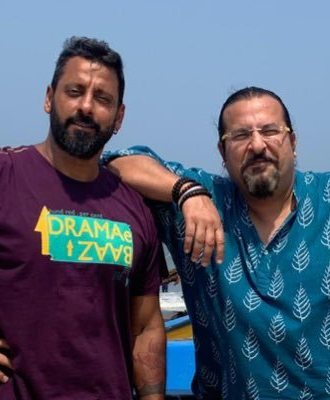 @Iamkavitak But lunch is too early for me to have Whisky with ….. … 🤓

Rocky and Mayur are food enthusiasts, television anchors, and childhood friends who have travelled more than 120,000 kilometers across the length and breadth of India in search of great food experiences. Known as India’s favorite foodies from the popular travelogue ‘Highway on My Plate’, they live for the joy of engaging with people to share their varied experiences.

Rocky and Mayur have recently co-founded a corporate training company called MindsEye, where they engage with senior leadership and cross-functional teams through workshops focused on leadership, team building and innovation. Some of the major clients they have worked with include Ministry of External Affairs, Puma Sports, Microsoft, Pearson Education, TATA Motors, Boston Scientific and Oracle.

Through multiple award-winning shows and bestselling books, the duo has reached out to over 40 million people. Their highly-anticipated book, “Highway on My Plate – The Indian Guide to Roadside Eating” won the Gourmand World Cookbook Award for ‘Best In The World’ 2011 (Volume 1) and ‘Best In the World 2014’ (Volume 2).

As social media influencers with a strong clout in the travel and lifestyle space, the duo has worked with several tourism boards such as Australia, Singapore, Mauritius, Slovenia and South Korea; as well as brands like Kurkure, Domino’s, Smirnoff, Vistara, KFC, Quaker, Maggi, Zomato and Bira.