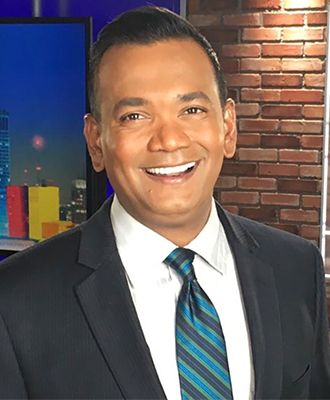 What’s a piece of career advice you got that just doesn’t stand the test of time anymore?

@RyanEFox2 @LizLewinTV Happy birthday to the guy with the most infectious laugh on TV. Here’s to you!!

Roop Raj is a news anchor and reporter with Fox 2 news channel in the USA. Besides reporting and anchoring, he also involves himself in speaking engagements. An eloquent speaker, Roop talks about the art of storytelling, media training, and inspires his audience with his wisdom about resilience and optimism.

He is regularly invited to be the keynote speaker for various associations including Rotary Club, Kiwanis Club and other non-profit organisations. He was also chosen to be a moderator for a day-long business summit featuring actress Jessica Alba, writer and speaker Seth Godin as well as the Governor of Michigan.

Inquisitive and questioning from a very young age, Roop created, produced and hosted a public-affairs talk show at the young age of 14 and one year later, appeared as one of the nation’s youngest television personalities on The Phil Donahue Show.

One of the defining moments of his momentous career came in the form of the marathon seventeen-hour coverage of Hurricane Katrina, where he wasn’t merely a news carrier but also assumed the role of ‘Problem Solver’ by providing solution-oriented insights. Roop believes that journalists should rise to the fore as problem solvers and be catalysts in the process of constructive change in the society.